And I Said No Lord in production

Joel Katz's book of photographs and writing about his experiences during Freedom Summer in 1964 is in production. All writing and design have been finalized. The publisher, the University of Alabama Press, is anticipating a February–March release date. The book includes 84 photographs and will be approximately 180 pages, 8.5 x 7.25".

An exhibition of 37 of the photographs in the book, some as large as 24 x 36", will open at the Moore College of Art & Design on 25 January 2014. A reception is planned for Friday 7 March at 5:30 pm. We anticipate that books will be available at that time.

Lecturing in the U.S. and Europe

Joel Katz lectured on information design at Gobelins, l'École de l'Image in Paris on 31 October. He is scheduled to lecture at Rochester Institute of Technology in mid-March 2014.

Projects shaping up for Designing for Understand 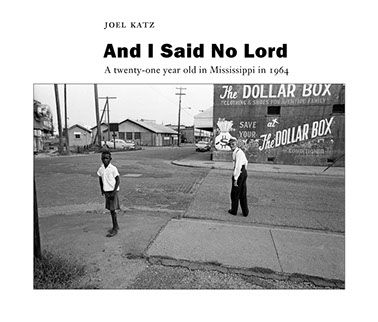 The projects for Joel Katz's information design course at The University of the Arts, now in its sixth year, will be finalized in December for the spring semester 2014. Topics under consideration include: Weight gain in cities with losing sports teams; the origin of early Roman tiles in the Forum; the positive impact of Project Home on Philadelphia's homeless; the sourcing of figurative and decorative terra cotta casts in Basilicata, Italy; mitigating violence among youth in Philadelphia; an as yet undefined project dealing with the impact of Pennsylvania's firearms laws; and a site explaining the work of the U.S. National Trust for Historic Preservation. Five or six projects will be assigned to teams of two or three students in the second semester of their junior year.