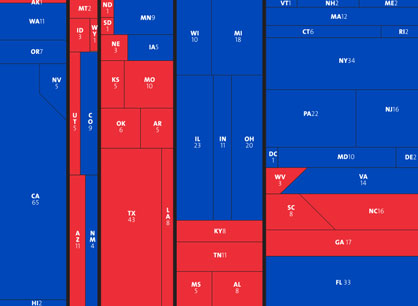 This cartogram shows the dis- tribution of the same 539 electoral votes if they were proportioned according to state populations. Compared to the map on the previous page, it is easy to see

that states with small populations (Wyoming, Alaska, the Dakotas)
lose electoral votes and that

states with large populations (California, New York, Texas) gain them. While the fairest solution is
to eliminate the Electoral College altogether and elect the President and Vice President directly, this reallocation of electoral votes
greatly reduces the system’s fundamental unfairness.