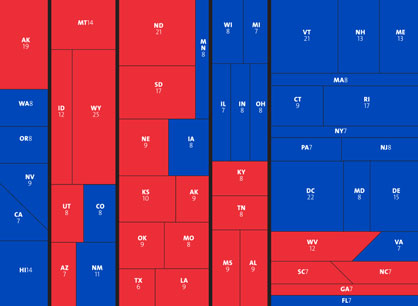 Electoral power is the relation- ship of the “value” of each person’s vote in one state compared to each person’s vote in another state. Because every state has a minimum of three electoral votes regardless of
its population, the residents of states with a small population are disproportionately powerful. This cartogram shows that the citizens of Wyoming, the country’s least populous state, have more than three-and-a-half times the power of each resident of California.