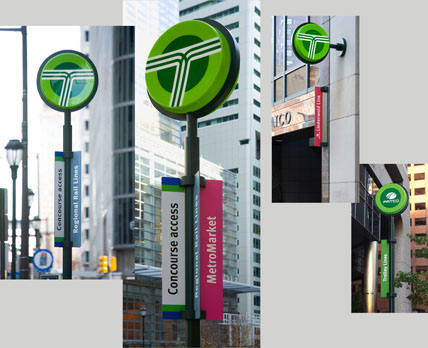 Ride!Philadelphia, the program begun with bus shelter mapping and interpretation, was extended

to the portals to over 100 under- ground subway and commuter

The program consists of five components.

A system identifier, originally a

“T” mark to signify all Philadel-

phia rail transit, which has two operating authorities; this was

later changed to the logos of the entities, near left. The marks are

lit when the stations are open.

a pole with one of three different mounts to accommodate all con- ditions that show what lines (or concourse) are available at the particular portal, before the user commits to the stairs.

The other three components are described on the following pages.